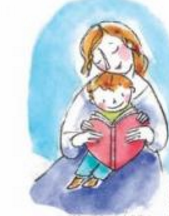 I was lucky- my family spoke to me even when I was a small baby. This helped me learn all the different sounds of English very early, and to grow my vocabulary. People also read to me, both in preschool (when I was 3 or 4) and at home.

This may seem like a strange question to ask- I am a native speaker of English from the United States, so it was easy to learn and happened quickly, right? Well, not really. It took me years and years to reach my current level of English, and even though I was born in 1980, my English is still developing- although of course it’s developing very slowly compared to when I was a child or even a teen.

I had an advantage for learning English, one that not all kids have, when I was a small baby: my family spoke to me a lot. They told me their names and the names of other family members, showed me objects and told me their names, adding words for colors and textures, and said nice things to me. They asked me questions- if I was hungry, thirsty, tired, clean or dirty, happy or sad. They also said lots of nice things to me. One important thing that my family did for me was to talk to me not just often, but with simple words so I could understand everything they said. And as my understanding of what they said grew, they gradually increased the complexity of their language.

Many people seem to think that small kids don’t understand spoken language- or worse don’t care that they understand. Anytime I’m in a place where I see small children, I watch if their parents or grandparents talk with them or not. In most cases that I see, parents or grandparents sit with their small babies without talking to them. However, research shows that English-speaking children learn around 1000 words per year, or about 3 words per day. So even a one year old baby understands around 1000 words, and a two year old who is just learning to speak already understands around 2000 words, and so on, all the way up tp the end of university, when native speakers of English typically know around 25,000 words.

Learning a language, whether it is one’s first language or a second, third or fourth one, is not just about vocabulary. At its most basic, language is a set of sounds used to encode ideas. By connecting sounds with each other, we get words, phrases, sentences, and discourse. So, if you can’t hear the difference between various sounds, you will not understand individual words, or larger pieces of language. In languages that use alphabets, this helps kids who are a little older to learn the letters and the different sounds they make, knowledge which is necessary for learning to read. If you don’t know the sounds of English and which letters make which sounds- you can’t learn to read.

Another of the ways my family helped me to learn English was by reading simple stories to me. In fact, my mom read stories to me every single night, and also often in the daytime. (As for my dad- he created his own stories and told them to me!) My mom also taught me the letters of the alphabet and, very importantly, sent me to preschool when I was three. This was a really great decision- in the US at the time, most kids started school in the first grade, at age 6, 3 years later than me. Talking with other kids and with the teacher helped me to learn the language. The teacher also read stories to us every day. This helped prepare me and the other kids lucky enough to go to preschool to begin reading ourselves